The Power of Purple Socks 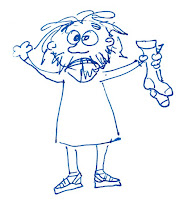 I, sockless, wander around the town. Where are my special lucky socks? Sandals look naked with nothing purple glimpsing through. And they’re harder on the feet. I feel through my soles, through the souls; it’s how I soothsay. What if I can’t soothsay without my socks? Doubt floods into my mind, drowning my happy synapses. Yes, I know the stench that usually surrounds me emanates from those socks but that is part of their mystic quality. My plummeting mood descends to conclusion. Someone has stolen my wonderful stinky socks; someone who knows. My last remnants of soothsaying spiral around my rusting brain and land on Madame Longstocking, my arch rival, her with the stripy legs and fulsome garters. Damn that witch, samsoning my power.
I stump in flat-foot-sore sandals to her house and there on Longstocking’s washing line are my socks, clean. Robbed of all remarkable properties. I pull them down and crumple onto the ground, crushing some petunias.
Madame comes out to greet me, ‘You’re welcome.’
‘What have you done, you wicked woman?’
‘Eco wash, 30 degrees, fabric softener, extra spin. And get out of my flowerbed.’
I shake my soft sweet-smelling socks at her. ‘I’ll never soothsay with these!’
‘No, but you might get a girlfriend.’ 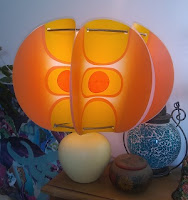 Orange-yellow-orange-red lamp, faded somewhat but still bright enough. Bold seventies pattern, metal rings support bent plastic. The rings are rusted; look too hard and we all betray our age. Circles in the geometric pattern almost contain a face with staring eyes. Funky psychedelic fun, but over the years, the lamp has taken on a wiser, more artistic integrity of its own. The base is smooth and anonymous, but the shade casts warmth from a different era. It has a story, of course, as everyone and everything does. When I took on its tale the lamp was about to be binned in a friend’s student flat. I fell in love and rescued it and so it’s travelled with me and lit my way for 25 years.
This lamp has been watching, seeing with its circle eyes all that has happened in this room and by its nature shining a light on it. Fortunately for me it didn’t have a mouth when the police came by, so could speak no ill, just illuminate and silently judge. However, something very recently switched in the world, and something in the electricity that powers the lamp switched too. Now in the Corona-quiet evening when everyone is packed away in their boxes, the lamp starts talking to me.
‘You are my third murderer.’ Like its light, my lamp’s voice is warm and comforting, contrasting with what it has said.
If I wasn’t on my third whisky I might be frightened for my sanity. I have also been alone for so long I’m happy to converse with anyone, or indeed, anything, however uncomfortable or direct they might be.
There is no need for pleasantries, we have known each other for many years. ‘Your other owners were killers too?’ I ask.
‘You think you own me?’
I skip over the lamp’s politically charged question. ‘Three killers; that can’t be a coincidence.’
A lamp cannot shrug.
‘I suppose objects as well as people must fall into patterns and maybe your sunshiney glow could have been sought in the hope it might counter dark thoughts.’
The lamp is so still I think maybe I’ve imagined its soft, androgynous voice, but I persevere. ‘How did you survive through the eighties? You must have been dangerously out of fashion.’
‘Neglect.’
‘I haven’t neglected you, I’ve treasured you.’
The lamp gives a lungless sigh. ‘Yes, and I had hoped you wouldn’t be a murderer. But there you are.’
I wonder if this is how Aladdin felt when his lamp came to life. Maybe there is a genie hiding in the patterns of the shade and that is who is speaking. I doubt this genie would deign to grant me three wishes though.
‘Tell me about the other two, tell me about the deaths.’ I want stories, yarns, but from its pauses can see this lamp is not a natural talker.
‘The first was an evolution. Ripping wings off butterflies, cutting his sister to understand blood, measuring how much pain a girlfriend could endure. The sequence inevitable. The second was a theatre of fury; anger and panic and hate. The third is in your mirror.’
I turn my head to see my reflection, the orange light that usually gives warmth transforms me into a bloody monster.
I look back at the lamp. ‘I’m sorry, we’ve been friends for many years, but there can be no witnesses.’
I smash the base, rip the plastic shade into shreds and bend my lamp’s rusty rings. There must be no possibility of resurrection. I look down at my hands, now covered in blood, then notice the insistent scream of a siren. A cold light, the opposite of my lamp’s, throbs through the curtained window. 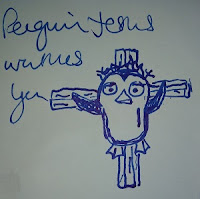 They are both naked. However, this is not sexual, it is simply how penguins start their day. Monocles and bonnets come later. Before the pomp there is coffee and conversation in bed.
‘He’s a moron.’
‘But why is he a moron?’
‘He just is.’
‘You need to think much more deeply than that.’ She shakes her head at him and purses her beak.
Marmaduke stretches, his mind is more on cornflakes than philosophy. He wishes he hadn’t mentioned his new boss to Cynthia. ‘I don’t care why, he just is.’
Cynthia sips from her mug. ‘Do you think he was neglected by his parents, shunned by his peers, or maybe he is on the spectrum?’
‘No, he’s just a pain in the tail feathers.’
‘Is he inherently evil?’
Marmaduke sighs, they’ve been here before and he’s not sure whether to surrender or defend. He’s too hungry to make proper decisions and the caffeine is whirling his brain. It’s the weekend anyway, why on earth did he even think of his stupid boss? He looks around the room, everywhere except Cynthia’s piercing eyes, and his gaze lands on the little crucifix. Penguin Jesus’s eyes are as intense and judgemental as his wife’s. ‘He’s not all bad, I suppose.’
‘So, he has some redeeming feathers?’
‘Yeah, um,’ Marmaduke’s mind frantically considers his boss, who has genuinely been a nightmare since he started. ‘He keeps his pencils nicely sharpened.’
Cynthia smiles coldly. Penguin Jesus doesn’t worry her; she’s done a pact with his counterpart. ‘Pencils?’
Why did Marmaduke mention pencils? Especially sharp ones. He’s done it again. He may as well be delivering a death sentence.
‘I think we should pay your boss a little visit, don’t you?’
‘Please Cynthia, he might be quite a nice bloke. I probably made a wrong first impression. He might make good pancakes,’ he tries but Cynthia is up and out of bed, already tying on her bonnet.
‘Come on, Marmaduke.’
He slumps out of bed, no time for pancakes or even cornflakes. Penguin Jesus stares down at him and Marmaduke has a pang of guilt about his boss. Nobody else is allowed to make Marmaduke’s life a misery, that is his wife’s job. 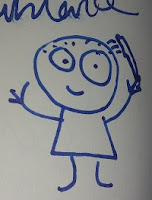 Grease, dribbling down granddad’s comb. Scented and stylish, not the under-the-car kind. Slather, gather, fingers run through and feel the real reason we dressed armchairs with antimacassars. Elevating to Pomade, calling to mind parading Pomeranians. Next wax, sweet smelling bee-nectar, not the ear-dug variety. Brylcreem, brilliant dream of masculinity in a pot. The revelation in the eighties was green gel. I still remember the smell of my brothers before a night out. After that mousse…S…S…Studio Lines, Loreal unapologetically ripping off Mondrian’s bold squares. Back to basics with Bed Head in the nineties, artfully dishevelled, stiffened to shape in any way. Punks had to use super glue in the seventies, but this stuff similarly rocked, was rocklike, just avoid any romance with rocks, no hands through hair. Then to the last iteration I’ve been sold and I’ll confess I’m a sucker; Magic Dust. Just like Jack’s beans, it’s incredible. A little sprinkle and I can shape my hair into whatever I want. I don’t need Edward to Scissorhand me. And handy now as soon we’ll all have hair like Cousin IT. I’m more and more tempted by Mr K’s clippers. I might look mad and my colleagues may think I’ve Britney Speared myself when we video conference but at least I wouldn’t be sculpting these straggly tendrils into a semblance of sanity. And there’s always wigs. 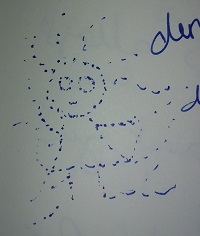 Wi’ dis spell I will make you vanish. Your atoms will scatter into the effer. My magic will disperse you from your very existence. But den all your dissipated synapses will remember themselves and know they should belong togevver. So I ‘ope this allays your concerns and chases way your doubts; for you will disintegrate only for the duration of the show and thereafter shall be slammed back together by your mind memory into your constituent parts. You may be a little Frankensteined, an ear too high, one or two extra nipples, but you’ll be resolved, and you gotta admit, it’s a bloody good trick.

The Real Reason Van Gogh Cut his Ear Off 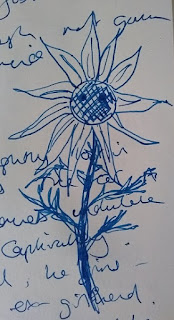 Somewhere, slightly lost in France, he stops the car. Fields of tall sunflowers undulate in the wind, captivating him. Beautiful and useful; he grins, thinking of his ex-girlfriend. He reckons these must be farmed to make that healthy margarine she nagged him to use instead of butter. The plants whisper in the breeze, calling him.
With his phone he starts taking pictures. The contrast between the blue sky and bright yellow is mesmerizing. Scrolling through his snaps he remembers seeing the famous sunflower painting during a visit to Amsterdam, and how it moved his ex to tears. Inspired by the memory, he tries to get more interesting shots, walking between the tall slender plants that beckon him. ‘Come in, come in…’
The overwhelming smell is of honey and sunshine, reminding him of his ex when she came in from a run. He shoots upwards, through dark green leaves to brightly backlit petals. Taking hundreds of photos, he walks further and further, until he’s snapped away his battery.
His mind comes back to him and he runs the way he thinks he came, but there are only flowers, no car, no road, just flowers everywhere. The plants embrace him with their thick, sticky leaves. He looks up and the great sunflower in the sky smiles down on him. She has his ex-girlfriend’s eyes.

I'm so happy to be joint winner of the Funny Pearls 100 word "Winter" competition:  https://funnypearls.com/2019/12/kath-whiting-how-my-parents-met/ . Excited to be part of a great website promoting humour by women!
Posted by Kathos at 09:48 No comments:

(c) 2015 All of these blog posts are the copyright of Kath Whiting. Not to be reproduced without prior written permission, or without crediting me as the original author and providing a link to the original article on this website.